At H&C, we are constantly developing solutions to enhance efficiency and drive growth in your business.

Use the below filters to view our products by brand and category and learn more about how they could benefit your operations.

H&C is recognised as a world leader in automated product handling and reverse packaging systems. While many other companies provide solutions to putting product into packaging, we are specialists in removing packaging from product ready for further processing.

Our technologies were developed for the cheese processing and cheese conversion operations but have since been applied to meat processing and e-commerce fulfilment.

H&C equipment is renowned for being robust, reliable and simple to operate, as well as providing an excellent return on investment in operational cost savings.

All of our equipment can be provided as standalone machines or as part of a complete process solution. We have particular expertise in the integration of these automated systems into existing process lines.

Opens boxes of varying shapes and sizes at high speed, for non-sanitary operations
Find Out More

Opens boxes of varying shapes and sizes, without operator intervention.
Find Out More

Removes cardboard cartons from 20kg/40lb blocks of cheese at a rate of 16 blocks per minute.
Find Out More

Automates the removal of vacuum bags from 20kg/40lb blocks of cheese.
Find Out More

Automates the removal of vacuum bags from multiple cheese block types and sizes.
Find Out More

Automates the removal of cartons from pallets stacked in random patterns.
Find Out More

Detects defects and foreign objects on the surface of dairy blocks.
Find Out More

The H&C Mould Detection Unit is a visual defect recognition system that detects anomalies on the surface of dairy blocks, based on colour.

Also known as the Defect and Foreign Object Detection system or DFOD, it was developed to provide the critical control point after blocks are de-bagged, prior to further processing such as slicing or shredding.

The H&C Mould Detection Unit is the first in the world to automate inspection for visible mould and clear plastic bag residue after de-bagging.

It can also inspect the product through the vacuum bag prior to debagging, reducing downtime due to contamination of the line.

The unit can handle varying formats from 10kg/20lb to 20kg/40lb blocks. All six sides of each block can be inspected at a rate of up to 23 blocks per minute. 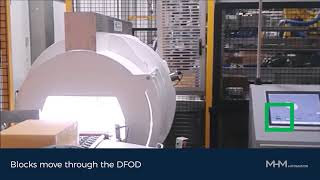